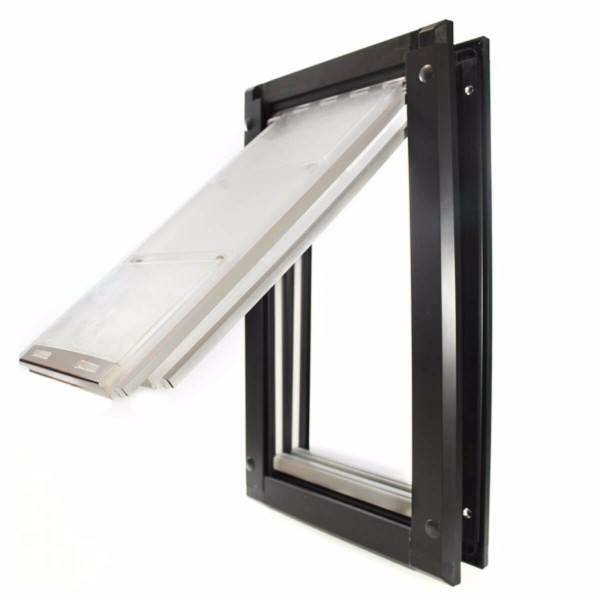 Endura Pet doors are energy efficient dog doors and can be had with single flaps and double flaps in white, tan, and bronze colors

This pet door is all about the flap. This new door uses the Endura flap, which has been tested beyond 3,000,000 cycles without a failure!!! The key to its durability is that it swings on bushings at the top instead of flexing at the top like a typical soft vinyl flap, this pivot allows the door to swing without wear and tear. This new Endura flap is available in taller sizes than most other pet doors. The manufacturer refers to this as "aspect ratio". A high aspect ratio with a tall skinny flap makes it easier to fit multiple dogs, as the flap can be lower to the ground and yet still be tall enough for a larger dog at the same time, and is still not unnecessarily wide. Because of the full length magnets that go all the way down the sides and across the bottom of the flap, this door requires more force to open. We have customers with cats using the largest size, but if your pet is particularly skittish you may want to consider the alternatives and consider a Hale door as they are easier to open.

There are 3 important sizes with respect to pet doors:

Flap Size is the most important, so it is listed on the main page. This is the size of the space that your pet will have to fit through.

Cutout Dimension refers to the size of the hole that needs to be cut in a wall to install the pet door.

Outside Dimension is the size of the outside of the frame, which can sometimes be important when installing a pet door in a limited space.

All sizes are given Width x Height.

Patio Pacific Inc Endura Flap™ Pet Door Warranty
To the original purchaser, Patio Pacific Inc warrants this product and all of its component parts to be free of defects in materials or workmanship for a period of 15 years from the date of delivery to the customer. Endura Flap™ assemblies are warranted for a period of 15 years. Endura Flap™ assemblies employed in commercial kennels are warranted for a period of 3 years. Damage caused by accident, improper installation, abuse or normal wear, including damage by pets or glass breakage, is specifically excluded from this warranty. Defective materials returned to Patio Pacific Inc, together with proof of purchase, will be repaired or replaced and returned to the customer free of charge. Pet doors of other manufacturers installed in Patio Pacific products are covered by the warranty of the other manufacturer and not by Patio Pacific Inc.
CLICK HERE FOR SPECIAL INSTRUCTIONS FOR INSTALLATION ON THIN DOORS

For Single and Double Flap Models

Instructions
1. Tape the provided template to the door.

Figure 1: Leveling the template The top edge of the cut-out line should be 1-1/4 inch (or more) above the dog’s withers (shoulders) for the single flap door mount, and 2 inches for the double flap door mount. Be careful not to unduly reduce the strength of the door by cutting too close to the bottom of the door. Level the top edge of the cut-out line as shown
in Figure 1.

2. Mark the hole centers for the four holes and remove the template.

Figure 2: Drilling four 3/8” holes in Figure 2. Note: Drill bit needs to be long enough to go through the interior and exterior of the door. It should be both level and straight when making the holes to ensure the two frames will align properly.

4. Draw lines to connect the outsides of

5. Cut along the line as shown in Figure 3. Note: Jigsaw needs to be level and straight when cutting the lines to ensure the two frames will align properly.

6. Install the weather-stripping into the groove on both frames with the start/end gap at the bottom.

7. If a single flap door mount, place the pet door trim frame on the outside of the doorand the flap frame on the inside and skip to Step 14.

8. If a double flap door mount, assemble the four-piece tunnel by first bending the screw tabs down as shown in Figure 4 in the top and bottom tunnel pieces (the two identical shorter pieces). Note: Only bend the tabs once, bending more than once may result in the tabs breaking off.

Figure 3: Cutting along the drawn line

Figure 4: Bend the top and bottom of screw tabs

These images are representative. Appearance of your pet door may vary slightly depending on model.

9. Remove the screws in the four corners of the flap frame assembly as shown in Figure 5.

11. Slide in the tunnel side pieces as shown in Figure 7.

12. Bend the tabs down with your thumb or a screwdriver handle.

13. Place the flap frame with the tunnel attached on the inside and Figure 6: Align the top and bottom pieces and screw into place the other flap frame outside.

15. Start all four screws as shown in Figure 8, but do not tighten.

16. Before tightening down the screws, check that the pet door is level and adjust as needed.

17. Tighten the screws until the weather-stripping compresses and Figure 7: Push on the tunnel sides
the pet door touches the door. Do not over tighten.

18. Hammer the hole covers into the frame using the wooden end of a hammer (or similar non metal tool).

Figure 8: Screw together your door mount.